Pop quiz! If I asked you, “Who invented the index fund?” what would your answer be? I’ll bet most of you don’t know and don’t care. But those who do care would probably answer, “John Bogle, founder of The Vanguard Group.” And that’s what I would have answered too until a few weeks ago.

But, it turns out, this answer is false.

Yes, Bogle founded the first publicly-available index fund. And yes, Bogle is responsible for popularizing and promoting index funds as the “common sense” investment answer for the average person. For this, he deserves much praise.

But Bogle did not invent index funds. In fact, for a long time he was opposed to the very idea of them!

Recently, while writing the investing lesson for my upcoming Audible course about the basics of financial independence, I found myself deep down a rabbit hole. What started as a simple Google search to verify that Bogle was indeed the creator of index funds led me to a “secret history” of which I’d been completely unaware.

In this article, I’ve done my best to assemble the bits and pieces I discovered while tracking down the origins of index funds. I’m sure I’ve made some mistakes here. (If you spot an error or know of additional info that should be included, drop me a line.)

Here then, is a brief history of index funds.

What are index funds? An index fund is a low-cost, low-maintenance mutual fund designed to follow the price fluctuations of a stock-market index, such as the S&P 500. They’re an excellent choice for the average investor.

The Case for an Unmanaged Investment Company

In the January 1960 issue of the Financial Analysts Journal, Edward Renshaw and Paul Feldstein published an article entitled, “The Case for an Unmanaged Investment Company.” 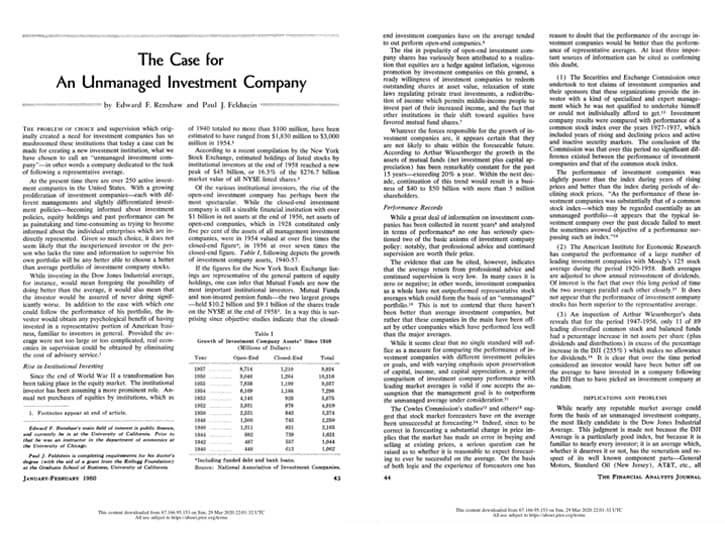 Here’s how the paper began:

“The problem of choice and supervision which originally created a need for investment companies has so mushroomed these institutions that today a case can be made for creating a new investment institution, what we have chosen to call an “unmanaged investment company” — in other words a company dedicated to the task of following a representative average.”

The fundamental problem facing individual investors in 1960 was that there were too many mutual-fund companies: over 250 of them. “Given so much choice,” the authors wrote, “it does not seem likely that the inexperienced investor or the person who lacks time and information to supervise his own portfolio will be any better able to choose a better than average portfolio of investment company stocks.”

Mutual funds (or “investment companies”) were created to make things easier for average people like you and me. They provided easy diversification, simplifying the entire investment process. Individual investors no longer had to build a portfolio of stocks. They could buy mutual fund shares instead, and the mutual-fund manager would take care of everything else. So convenient!

But with 250 funds to choose from in 1960, the paradox of choice was rearing its head once more. How could the average person know which fund to buy?

When this paper was published in 1960, there were approximately 250 mutual funds for investors to choose from. Today, there are nearly 10,000.

The solution suggested in this paper was an “unmanaged investment company”, one that didn’t try to beat the market but only tried to match it. “While investing in the Dow Jones Industrial average, for instance, would mean foregoing the possibility of doing better than average,” the authors wrote, “it would also mean tha the investor would be assured of never doing significantly worse.”

The paper also pointed out that an unmanaged fund would offer other benefits, including lower costs and psychological comfort.

The authors’ conclusion will sound familiar to anyone who has ever read an article or book praising the virtues of index funds.

“The evidence presented in this paper supports the view that the average investors in investment companies would be better off if a representative market average were followed. The perplexing question that must be raised is why has the unmanaged investment company not come into being?”

The Case for Mutual Fund Management

With the benefit of hindsight, we know that Renshaw and Feldstein were prescient. They were on to something. At the time, though, their idea seemed far-fetched. Rebuttals weren’t long in coming.

The May 1960 issue of the Financial Analysts Journal included a counter-point from John B. Armstrong, “the pen-name of a man who has spent many years in the security field and in the study and analysis of mutual funds.” Armstrong’s article — entitled “The Case for Mutual Fund Management” argued vehemently against the notion of unmanaged investment companies. 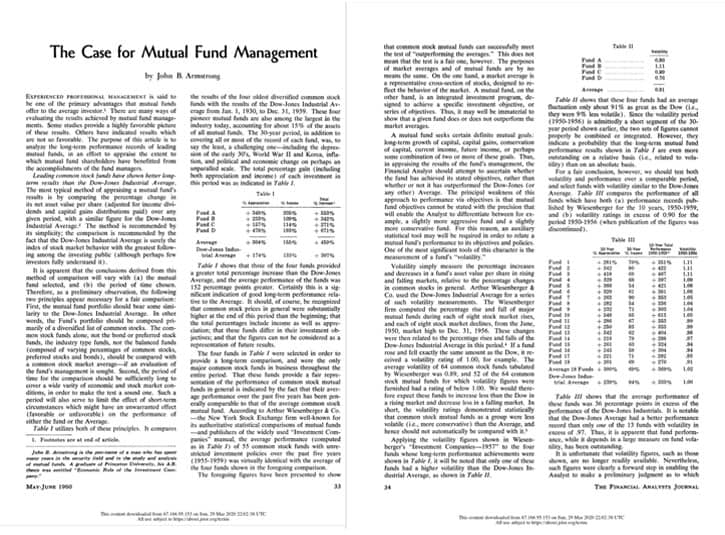 What’s more, he said, even if we were to grant the premise of the earlier paper — which he wasn’t prepared to do — “this argument appears to be fallacious on practical grounds.” The bookkeeping and logistics for maintaining an unmanaged mutual fund would be a nightmare. The costs would be high. And besides, the technology (in 1960) to run such a fund didn’t exist.

And besides, Armstrong said, “the idea of an ‘unmanaged fund’ has been tried before, and found unsuccessful.” In the early 1930s, a type of proto-index fund was popular for a short time (accounting for 80% of all mutual fund investments in 1931!) before being abandoned as “undesirable”.

“The careful and prudent Financial Analyst, moreover, realizes full well that investing is an art — not a science,” Armstrong concluded. For this reason — and many others — individual investors should be confident to buy into managed mutual funds.

So, just who was the author of this piece? Who was John B. Armstrong? His real name was John Bogle, and he was an assistant manager for Wellington Management Company. Bogle’s article was nominated for industry awards in 1960. People loved it.

The Secret History of Index Funds

Bogle may not have liked the idea of unmanaged investment companies, but other people did. A handful of visionaries saw the promise — but they couldn’t see how to put that promise into action. In his Investment News article about the secret history of index mutual funds, Stephen Mihm describes how the dream of an unmanaged fund became reality.

In 1964, mechanical engineer John Andrew McQuown took a job with Wells Fargo heading up the “Investment Decision Making Project”, an attempt to apply scientific principles to investing. (Remember: Just four years earlier, Bogle had written that “investing is an art — not a science”.) McQuown and his team — which included a slew of folks now famous in investing circles — spent years trying to puzzle out the science of investing. But they kept reaching dead ends.

After six years of work, the team’s biggest insight was this: Not a single professional portfolio manager could consistently beat the S&P 500.

As Mr. McQuown’s team hammered out ways of tracking the index without incurring heavy fees, another University of Chicago professor, Keith Shwayder, approached the team at Wells Fargo in the hopes they could create a portfolio that tracked the entire market. This wasn’t academic: Mr. Shwayder was part of the family that owned Samsonite Luggage, and he wanted to put $6 million of the company’s pension assets in a new index fund.

This was 1971. At first, the team at Wells Fargo crafted a fund that tracked all stocks traded on the New York Stock Exchange. This proved impractical — “a nightmare,” one team member later recalled — and eventually they created a fund that simply tracked the Standard & Poor’s 500. Two other institutional index funds popped up around this time: Batterymarch Financial Management; American National Bank. These other companies helped promote the idea of sampling: holding a selection of representative stocks in a particular index rather than every single stock.

Much to the surprise and dismay of skeptics, these early index funds worked. They did what they were designed to do. Big institutional investors such as Ford, Exxon, and AT&T began shifting pension money to index funds. But despite their promise, these new funds remained inaccessible to the average investor.

In the meantime, John Bogle had become even more enmeshed in the world of active fund management.

In a Forbes article about John Bogle’s epiphany, Rick Ferri writes that during the 1960s, Bogle bought into Go-Go investing, the aggressive pursuit of outsized gains. Eventually, he was promoted to CEO of Wellington Management as he led the company’s quest to make money through active trading.

The boom years soon passed, however, and the market sank into recession. Bogle lost his power and his position. He convinced Wellington Management to form a new company — The Vanguard Group — to handle day-to-day administrative tasks for the larger firm. In the beginning, Vanguard was explicitly not allowed to get into the mutual fund game.

About this time, Bogle dug deeper into unmanaged funds. He started to question his assumptions about the value of active management.

During the fifteen years since he’d argued “the case for mutual fund management”, Bogle had been an ardent, active fund manager. But in the mid-1970s, as he started Vanguard, he was analyzing mutual fund performance, and he came to the realization that “active funds underperformed the S&P 500 index on an average pre-tax margin by 1.5 percent. He also found that this shortfall was virtually identical to the costs incurred by fund investors during that period.”

This was Bogle’s a-ha moment.

Although Vanguard wasn’t allowed to manage its own mutual fund, Bogle found a loophole. He convinced the Wellington board to allow him to create an index fund, one that would be managed by an outside group of firms. On 31 December 1975, paperwork was filed with the S.E.C. to create the Vanguard First Index Investment Trust. Eight months later, on 31 August 1976, the world’s first public index fund was launched.

At the time, most investment professionals believed index funds were a foolish mistake. In fact, the First Index Investment Trust was derisively called “Bogle’s folly”. Nearly fifty years of history have proven otherwise. Warren Buffett – perhaps the world’s greatest investor – once said, “If a statue is ever erected to honor the person who has done the most for American investors, the hands-down choice should be Jack Bogle.”

In reality, Bogle’s folly was ignoring the idea of index funds — even arguing against the idea — for fifteen years. (In another article for Forbes, Rick Ferri interviewed Bogle about what he was thinking back then.)

Now, it’s perfectly possible that this “secret history” isn’t so secret, that it’s well-known among educated investors. Perhaps I’ve simply been blind to this info. It’s certainly true that I haven’t read any of Bogle’s books, so maybe he wrote about this and I simply missed it. But I don’t think so.

I do know this, however: On blogs and in the mass media, Bogle is usually touted as the “inventor” of index funds, and that simply isn’t true. That’s too bad. I think the facts — “Bogle opposed index funds, then became their greatest champion” — are more compelling than the apocryphal stories we keep parroting.

Note: I don’t doubt that I have some errors in this piece — and that I’ve left things out. If you have corrections, please let me know so that I can revise the article accordingly.