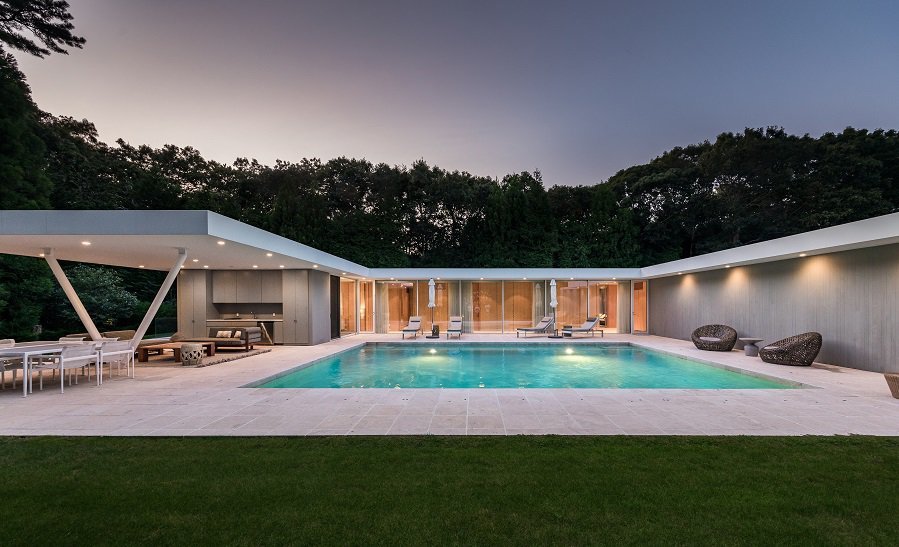 Many million dollar homes come with name-bragging rights. Sometimes, it’s because a celebrity once lived in the house, or because a famous designer left its touch on the home’s interiors; or maybe the address itself is well-known, for one reason or another.

But there’s a whole other level of name dropping that comes with owning a home envisioned by one of our generation’s leading architects. And that’s exactly the case for this modern glass home in Sagaponack, NY, designed by world-renowned architect Shigeru Ban.

In fact, the property is the award-winning Japanese architect’s first and only work in Long Island, and has recently hit the market with a $4,995,000 price tag. Listed with Matt Breitenbach of Compass, the architectural masterpiece was already marked as Contract Signed on the brokerage’s website mere days after it came to market, which means it’s likely that an architect buff has already seized on the opportunity to own a home designed by the Pritzker-prize winner.

Famous for blending traditional Japanese elements with modern Western architecture, Shigeru Ban was named to TIME magazine’s shortlist of 21st-century innovators, won the 2014 Pritzker prize (the biggest distinction in the architecture world), and left his imprint on structures like the Aspen Art Museum, Centre-Pompidou-Metz in France, and Tainan Art Museum in Taiwan.

Despite the many accolades, the Japanese architect is most known for being a champion for sustainable architecture and has been instrumental in designing disaster relief housing from Rwanda to Turkey.  His design philosophy is centered around creating uniquely free and open spaces with concrete rationality of structure and construction method, and the Sagaponack home is a perfect embodiment of this.

With a design based on Ludwig Mies van der Rohe’s unbuilt Brick Country House (which dates back to 1924), the 8,000-square-foot home boasts unique architectural features, including a row of pillars that line the path to the front door — and that can double as hidden storage.

The 5-bedroom, 5.5-bath home comes with exceptional furnishings by renowned designer Shamir Shah. It has floor-to-ceiling windows, an oversized living room (with a wood burning fireplace and wraparound views of the landscaped lawn), and a massive workout room that is more akin to a private high-end gym — complete with floor-to-ceiling mirrors and every piece of equipment you could think of, including a spin bike, elliptical, treadmill, press machines, and more.

The indoors seamlessly open to the outdoor areas, where there’s a heated in-ground pool and a pool-side terrace with multiple lounging areas — adding to the tranquil zen garden area (with a modern stone fountain) which greets visitors as they enter the property.