Similar to the increased waiting times to get a COVID-19 test these days, it’s taking an extended amount of time to get a mortgage to the finish line.

The reason is simply unprecedented demand, just like those COVID-19 tests. The more people that need one, the longer the wait, period.

This is the downside to record low mortgage rates, which while undoubtedly great for homeowners, mean mortgage lenders are absolutely slammed. 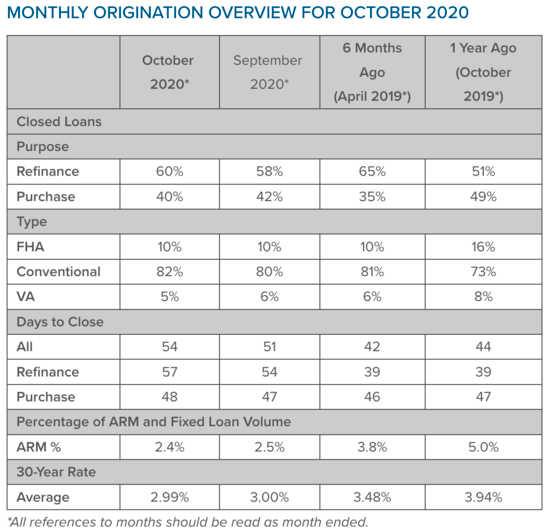 While you might see advertisements telling you it’s possible to get approved for a mortgage in just minutes, that’s very different than actually closing a home loan.

Sure, you can get the ball rolling right away, maybe get a fairly solid mortgage pre-approval that has been run through an automated underwriting system the same day.

But in terms of your loan actually making it to the funding table and getting recorded, the timeline might be closer to two months than 10 minutes.

The latest Origination Insight Report from Ellie Mae revealed the average time to close all home loans increased to 54 days in October, up from 51 days in September.

For perspective, it took an average of 42 days to get a home loan closed six months ago, and 44 days a year ago.

Back in April, a refinance took just 39 days, while a home purchase took 46 days. So while purchase loan closing times have held fairly steady, refis are taking nearly three weeks longer on average.

In other words, be patient and expect it to take a while, regardless of all the cool new technology you’ve seen and heard about.

Yes, it’s easier to get a mortgage these days thanks to digital mortgage applications, including those powered by Ellie Mae themselves, but that doesn’t necessarily mean the process goes much faster.

It just means you’ll get tasks done quickly, then spend a lot of time twiddling your thumbs while home appraisals get scheduled and your loan makes it through underwriting and on to the funding department.

Ellie Mae also noted that mortgage rates fell below three percent for the first time since the company began tracking such data back in 2011.

Again, this explains why those wait times to get a mortgage have increased so much.

The report revealed that the average 30-year fixed note rate was 2.99% in October, down from 3% in September and 3.94% a year earlier.

Combined, that was enough to push the average interest rate on a closed loan below 3%.

My expectation is this number will continue to fall as mortgage rates have only moved lower in recent months, and the data lags.

In summary, patience is a virtue right now when it comes to just about anything, including home loans.

And remember, aside from it being difficult (by human nature) to wait, mortgage lenders also tend to keep rates elevated when demand is super high.

So it could actually pay to wait to apply for a refinance until things calm down – the only dilemma there is if rates happen to rise during that time.

About the Author: Colin Robertson

Before creating this blog, Colin worked as an account executive for a wholesale mortgage lender in Los Angeles. He has been writing passionately about mortgages for nearly 15 years.